By the time I said goodbye to Momma, only a few weeks were left of Spring quarter. So, I took advantage of them by inviting Shannon, an art history student, to Assisi with me. If you recall from an earlier post, my mom and I took a day trip to Assisi, but my camera died within 15 minutes of arriving. It wasn’t going to happen to me this time. I packed the giant digital SLR I borrowed from the UWRC office as well as my hand-held digital. I meant business. Don’t worry, I warned Shannon ahead of time.

Since Assisi is a rather small town, we followed much of the same track my mom and I did two weeks before. We took the bus to Piazza Matteotti, checked out the ancient Roman amphitheater and then snaked our way through the streets of town ending at San Francesco. For lunch, we actually made it to the restaurant suggested by my good friend Rick Steves, Locanda del Podesta. It was delicious. We partook in some of the region’s specialties, namely sausage. They also had a wonderful Cacio e Pepe (cheese and pepper spaghetti). 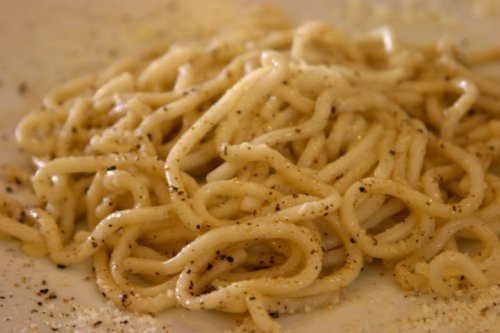 Before I move on to the wonderful Giotto chapel, I would just like to say that I did not stalk the bride and groom tying the knot in Assisi that day. I just happened upon the ceremony in San Rufino. They drove past us an hour later in a vintage car with her veil blowing in the wind. So, when I saw them later at the Roman temple, I decided it was fate and that I needed to photograph them. The setting was beyond picturesque and the couple was adorable. I couldn’t resist. So, look away if commitment freaks you out. Here’s the shot:

After the shameless couple-I-don’t-even-know photo shoot, it was time for Shannon and I to rediscover the Giotto chapel in San Francesco. It was just as glorious as I remember, except this time I came equipped with a camera. So, now I can share it all with you. While we were there (in our hardhats), one of the restorers was touching up a little corner of fresco. “You are so cool,” I wanted to say. He probably already knows it. 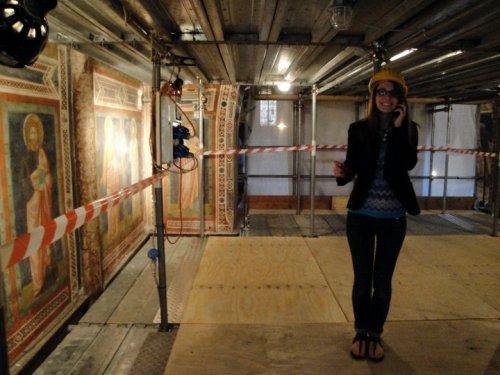 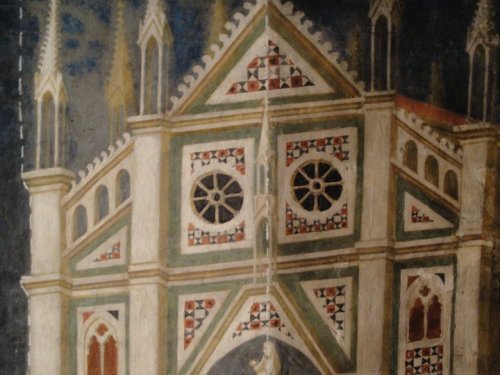 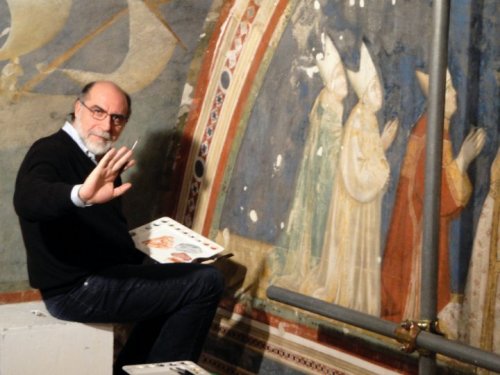 And for no reason at all other than I love food and I love photos, here is my favorite shot of some goodies we found at a bakery.

Returning to Rome brought a few more second chances. Stacey and Brittany, two of Leisha’s friends who had been in Rome the week previous, returned to give Rome another shot. Unfortunately, nature was against them and they caught colds in Barcelona. After sleeping it off for a few days, I met up with them for a tour of Porta Portese market. I bought the most lovely vintage postcards of Rome and Naples. I have plans to use them in the future, so keep your eyes peeled. After the market we were in need of some serious nourishment, AKA gelato. I tried to take them to Giolitti, Leisha’s favorite gelato place, but when we arrived, there was a line out the door. It was the first seriously hot day of the year and everyone was in need of a little ice cream. We walked just a few blocks away to my favorite gelato place, Gelateria del Teatro. What a wonderful way to cool down.

A few days later Shannon and Shayna returned to Rome to stay with me before catching their flights back to Seattle. Shayna came back from Rogliano (southern Italy), with all the most wonderful stories of small-town life. She became a part of her host family and everyone shed tears when she left. Back in Rome, her final meal was spaghetti and meatballs. Goodbye Seattle friends! See you soon!

Always with a fanta.

After tying up spring quarter, it was time to pack and head to Barcelona…..

AKA Field Trip to Orvieto

Sabrina Tatta, one of the LSJ professors invited me to join her program on their day trip to Orvieto on Friday. Seeing as how I like to take advantage of as many free things as I possibly can, I said sure without hesitation.

We met at the Portone bright and early on Friday morning and as we were walking to the bus, it started to rain. It was the first raindrops I have felt since arriving in Rome a month and a half ago. It felt so refreshing. On our way to Orvieto we made a pit stop at Bomarzo. Bomarzo was made famous by the Park of the Monsters, AKA Villa of Wonders, AKA Sacred Grove. It is a park commissioned by Prince Orsini after his wife’s death as a kind of tribute to her. It includes a wide variety of monstrous sculptures intended to astonish. My favorite one is a monster’s face that you can walk into. The acoustics of the room inside the monster makes your voice carry and echo. Lucky enough, I went inside with Dominique, a singer, and she serenaded me. It sounded so beautiful.

Back on the bus and we were in Orvieto in no time. Orvieto is situated on top of a flat summit of a large butte of volcanic tuff that was once inhabited by the Ancient Etruscans and then the Romans. First we visited the duomo/cathedral, which held a particular surprise for me. I had no idea that the Chapel of San Brizio was in Orvieto! This chapel is home to Luca Signorelli’s most famous frescoes. 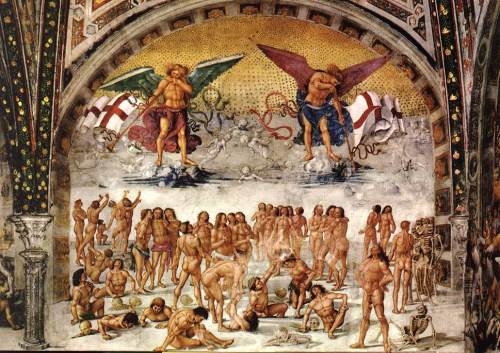 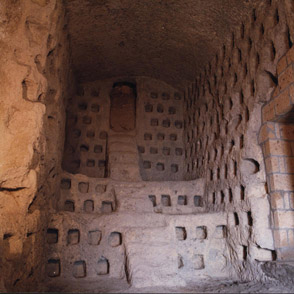 Pigeon holes in the underground

Next we signed up for a tour of Orvieto’s underground. I really think dad would have enjoyed this. The tunnels and caves were carved into the cliffs by the Etruscans and the Romans searching for sources of water to supply the ancient towns above ground. In the middle ages the tunnels were used as a means of escape during enemy sieges. In the early Renaissance, families who owned property above carved niches into the tunnel walls to encourage pigeons to nest there. Then the families would make money selling the eggs at market. In the 1700s, the tunnels were excavated a little too enthusiastically and the town above started to sink in and reinforcements had to be made. During WWII, the underground was used as a bomb shelter for the inhabitants of Orvieto and surrounding towns. Today there are over 1,000 tunnels underneath the city. So cool! 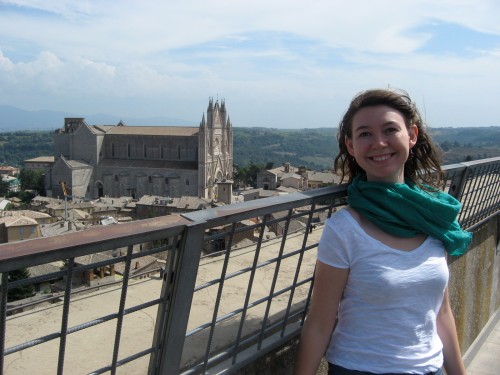 After the tour, we climbed the stairs of the clock tower for a beautiful view of the city. One of the great things about Italy is that in every city there is something that you can climb to get a view. After a little shopping and museum-bathroom-using, we headed down to St. Patrick’s Well. Apparently the well is so deep that the Italians have an expression about it. When you want to say that you don’t have enough money for something, you say that your pockets aren’t as deep as St. Patrick’s well. After that, it was time to hop back on the bus and head home!